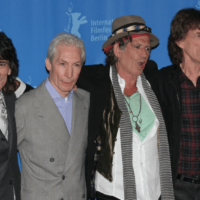 The Rolling Stones have premiered a new music video for their song “Living in the Heart of Love,” which was shot in Paris and directed by Charles Mehling. The video features Marguerite Thiam and Nailia Harzoune eating, drinking, partying and clubbing their way through the city. Late Stones drummer Charlie Watts makes several appearances in the visual; and the video ends with the words “Charlie is my darling” superimposed over the Paris skyline

The Stones dropped “Living the Heart of Love” back in August, and the track will appear on the upcoming 40th-anniversary reissue of ‘Tattoo You,’ out October 22nd. The song is one of nine previously unreleased tracks that will be included on the bonus disc, ‘Lost & Found.’

Take a look at the “Living in the Heart of Love” video – here.